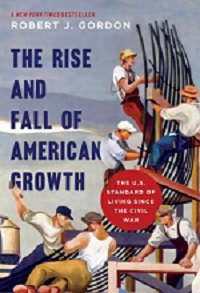 If a man in 1870 did a Rip Van Winkle, fell asleep for seventy years, and then woke up in 1940 he would be in an alien world. If the same man went to sleep in 1770 and woke up in 1840, most things would be recognizable. The man waking up in 1940 would see cars, washing machines and telephones. The man waking up in 1840 would see wood stoves, washing tubs, and postal service; all similar to 1770 culture.

I listened to a Planet Money podcast episode about Robert J. Gordon, an economist, and his book, The Rise and Fall of American Growth (2016). He proposes that we are not changing as fast this century as the past. The two technologies that drove this change were electricity and the internal combustion engine. Now we have this new technology that exploded in the 90’s, computers. So the person from 1940 waking up in 2010 would only see computers as a big change, a social change. Cell phones. Facebook. All the social media. We are slowing down, says Gordon. In the space of a lifetime, things changed more in for the first Rip VanWinkle than we have seen in the recent 70 years. But maybe the changes eruption in the age of computers are different.  I’m almost seventy and I’ve adapted to the computers, but there are other changes socially that are more dynamic.

During my time, that seventy years, we have seen a great change in the structure of the family. We now have many styles of family: the nuclear family, the single parent family, the extended family, the childless family, the stepfamily, the grandparent family, and many more. The Ozzie and Harriett family of Mom, Dad, and 2.5 kids only was possible for some families in 1950 to 1965.  Single parent may not mean a divorced parent in our time; this may just be a choice. Today that family pattern that we have considered ideal may be like many animals, extinct.

The change may be arguable, but my great grandparents had twelve children. My grandparents had two children. My parents had two children. I have one child. In my life this rings true. Families have changed. I have been a single parent and a stepparent and lived in an extended family in my almost seventy-year span. When I need help, I depend on my extended family of friends, kind of chosen relatives to help me. My own child is far away and has a more traditional extended family related by blood or marriage. But we text every week at least. That computer in my hand, my phone has made the difference in communication with my child and my other scattered loved ones. The article in the Wall Street Journal by Byran, “How the Definition of an American Family Has Changed”, notes that marriage is on the decline and there are more multigenerational families. Aging adults are moving back in with their children and children become adults that don’t leave home, and text rather than talk at the kitchen table.

The Pew Research Center reports that most Americans work in the service industry “107.8 million people”. (Desilver) In this report millennials (23 to 38 in 2019) are the largest part of the workforce. There are 24.3 million Americans in the education and health services portion of the economy, the second largest group of service workers. (Desilver) There are the people who are taking care of our aging parents, our sick, and our children. In 1870 it would have been family members doing this service. The combined effort of all the family was necessary to prosper.

A cousin became ill in the late 1800’s in my family and she was taken in by her aunt until she died years later. My great grandmother came to live with her son’s family when she could no longer keep her own house. My grandfather died in his home of cancer, tended by his wife and other relatives. My mother was born at home. Home was the also the place where the ill and aged and infirm could be taken care of. Care was available from the large extended family.

Today, I hire people to do this work, taking care of my aging mother. I hire people to clean my house when I can’t. My cousin makes part of her living taking care of other people’s pets. I have spent most of my life educating and caring for other people’s children. This is service. This is the work we do today. We need to revise our idea of work as well as that of family. Work today is service to others more than it is products on the shelf. Service as we would to family. Maybe confiding in my hairdresser is the connective tissue of our society today. How much do you count on your barrista when you get your morning coffee?

If I could wake up seventy years from now, in 2090, I wonder how this will have changed our society. How will it change us to purchase the service hours that were once given by family members? How will it change us to be distant from our most intimate family? Computers connect us so quickly, but they also distance us from each other. Our work does not seem connected to others when we do it on a computer in a cubicle. Email is not personal contact. This technology profoundly changes our society if our primary social connection with our most intimate loved ones over the cell phone or on Facebook. Do I trust my hairdresser or my massage therapist with more of my life than my brother or my son? I see them face to face more frequently. Does this increase the isolation of those without resources to purchase “family”? As you walk through your day tomorrow, think about how many services you pay for; how many people help you in your life as part of our economy.

What becomes of those who can’t pay? David Brooks in his Atlantic article, says,” The shift from bigger and interconnected extended families to smaller and detached nuclear families ultimately led to a familial system that liberates the rich and ravages the working-class and the poor.” Brooks also pinpoints the change around 1850 when most aging parents lived with their children. Only the wealthy can afford the support to keep that Ozzie and Harriett family going.

Those who can’t? Brooks points to the turn in the financial crash of 2008. Families of kin or not were forced to seek alliance of some sort to survive. If you no longer could live in a single-family home, that home became an extended family home. Perhaps some of the people were not related to you but some were. On the radio, I heard a talk show pundit sneering about the millennials who return home to live. “What do they do if Bernie doesn’t win? Just sit on the sofa and watch TV and eat chips?” These are adults, the largest portion of the workforce we have in this country and they do service work. They can’t afford to live in a single-family home like my mother and father could. The gap between what they earn and what they must have for that dream is insurmountable. Brooks suggests that we are returning to those extended families to provide the support we can not all buy. He uses the term from Daniel Burns, a political scientist at the University of Dallas, “forged families.” These families are forged in a furnace of burning loneliness and need.

So what will become of those who can’t pay for family? Some of the change can be accomplished socially, culturally as we change to accept different kinship bonds. My grandmother used to rent rooms to girls from the college physical education program long ago. She liked them because she said they never minded sharing a bed. Today they can marry and form a family. My neighbor acted as executor of her neighbor’s will because she had no family to do that for her.

But the larger question is political and economic. The increasing distance between the life of a wealthy family who can buy the services of family and the 99% who cannot will precipitate a crisis. Then politically, financially, the system that enforces the gap in economic equity must fail. At that time, I believe that those millennials and the Gen Z will make the change. They will not be on the couch no matter who wins or loses. Their forged families will endure; after all, who’s got your back?

Sign up to be notified when a new article is posted on this site.